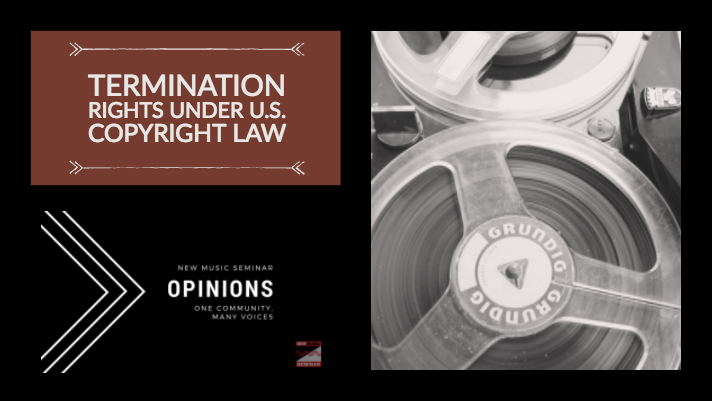 The views and opinions expressed in the Opinions articles are those of the author and do not necessarily reflect the official policy or position of New Music Seminar, and/or its owners, staff, partners, or sponsors. If you would like to submit an Op-ed piece for consideration, see our guidelines here.

The 1976 Copyright Act provides for the termination of copyright transfers – but authors need to act within a limited timeframe. Creators are entitled to reclaim their copyrights regardless of any contract stating otherwise after certain time periods. Therefore, even if an author, artist, musician, photographer or songwriter signed a contract which purports to transfer all rights in a work for perpetuity, the Copyright Act provides that the author of the work can terminate that grant and demand that the rights revert. Authors and creators are now entitled to terminate their contractual transfers and demand back control of their copyrights; authors can terminate their book publishing contracts, songwriters can demand the return of their musical compositions from music publishers and recording artists and record producers can demand the return of their sound recordings from the record companies.

According to the law, for copyright grants made on or after January 1, 1978 (the effective date of the 1976 Copyright Act) the termination period is 35 years under Section 203 of the Copyright Act. For pre-1978 works Section 304(c) of the Copyright Act, says that a copyright owner (or his or her heirs) can terminate all grants, licenses or transfers of beginning on the 56th year after that assignment was made. Termination may be exercised anytime during a 5 year period beginning at the end of either the 35 year or 56 year period from the execution of the grant or, if the pre-1978 grant concerns the right of publication of the work, then the period begins on the sooner of 35 years after publication or 40 years after execution of the grant. Although there are certain formalities which must be complied with to effectuate transfer, this essentially means that recording artists and songwriters were entitled to start exercising their right of termination on post-1978 works as of the start of 2013.

In the recorded music industry the big exception to the termination right is if a work was done as a “work-for-hire.” Section 101 of the Copyright Act of 1976 delineates what types of works by their nature are incontestable works for hire. It is essentially a two-part test: (1) was the work created by an employee within the scope of his or her employment, and; (2) if not, is it (a) one of the nine enumerated work-for-hire classes of works and (b) is there a written agreement signed by the author acknowledging the work for hire relationship. Included on the list of nine enumerated categories of works for hire are compilations, motion pictures and some other categories of media. Not included on this list are books, photographs, songs and sound recordings.

There are ongoing legal battles over how termination rights affect the book, comic book, and motion picture fields. Not unexpectedly, in the music business, the record companies, as well as the music publishers, are not pleased with the copyright termination provision and the inevitable ramifications thereof. With respect to songs and music publishers, some litigation has already been decided. In Scorpio Music S.A. v. Willis (Case No. 11 CV 1557 (C.D. CA 2012), California Federal District Judge Moskowitz determined that original Village People member, Victor Willis, could terminate his transfers and recapture a direct copyright interest in many of his group’s songs, including “YMCA.” In this case, after Willis notified Scorpio that he was terminating the prior transfers, Scorpio sued arguing that Willis could not terminate because a majority of each song’s authors had not also agreed to terminate their transfers. The court sided with Willis, ruling that an author can unilaterally terminate the transfer of his share in a copyrighted work without his co-writers. Willis stands to become the undivided owner of a one-half to one-third interest in 33 song copyrights.

Although the Scorpio decision addressed a fairly narrow point concerning multi-author transfers, the decision opens the way for most songwriters to get their composition copyrights returned and sets the stage for the bigger battles looming on the recorded music side of the business. The copyright termination procedures apply to the separate and equally lucrative sound recording copyrights transferred to record labels as part of typical recording artist contracts over the years. Since the term “sound recordings” is not explicitly contained in the enumerated categories list, practitioners representing record companies will need to try to find other ways to justify any claim that sound recordings are indeed worksfor hire in order to preclude termination by artists.

Although the termination rights of an artist under the 1976 Copyright Act would only be effective for the U.S. territory, the size of the U.S. consumer market still makes this a valuable right to reclaim.

As the saying goes, speak now or forever hold your peace!

New Music Seminar encourages conversation. Please share your thoughts below to add to the dialogue.

WALLACE E.J. COLLINS III, Esq. is an entertainment attorney handling both transactional and litigation matters. His transactional work focuses primarily on structuring and negotiating music, film, television and internet business deals. His litigation matters encompass representation of both plaintiffs and defendants in copyright and trademark infringement cases and defamation and privacy issues as well as general entertainment contract disputes. Wallace has authored numerous articles for legal and trade publications and is a regular contributor to Billboard, Entertainment Law and Finance and The New York Law Journal. He is a frequent speaker on panels, at lectures and at seminars throughout the country on current entertainment business issues as they relate the new technology and the internet and he has appeared on many national television and radio broadcasts. He was a teenage recording artist for Epic Records before attending Fordham Law School.