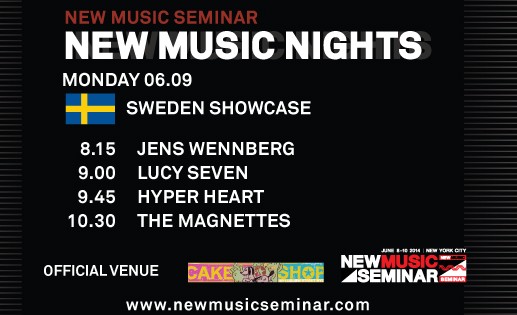 It’s no secret, the world loves Swedish artists. Luckily, our friends from Musichelp (SE) are back at New Music Seminar 2014 to help NYC get its (much needed) Swedish music fix with NMS New Music Night’s Sweden Showcase Monday, June 9 at Cake Shop!

Rock and roll Swedish singer/songwriter Jens Wennberg has cultivated his own distinct style filled with melodic guitar riffs and strong vocals laden with raw emotion reminiscent of only artists such as Elliott Smith and Kurt Cobain. It’s no surprise that when he released one song per month throughout last year for his EP, one included a cover of Nirvana’s “Serve The Servants” for the 20th anniversary of the release of Nirvana’s In Utero.

Proving Sweden’s music scene isn’t all indie-pop/synth melodies, Lucy Seven’s sound encapsulates the word “Rock” (with a capital R). Hard guitar fueled by absurdly rapid tempos, the Swedish rockers talent is truly heard in their ability to maintain a sense of calm admist the chaos created in their sound. Their debut album received praise throughout Europe and now the band has their sights set on the US, are you ready NYC?

Rave synths, jungle drums, indie ballads and more, Hyper Heart has anything but genre or style-specific boundaries. Since their 2011 start, the band’s plan has been to “let all creativity run wild” which we couldn’t be happier about. Hyper Heart’s most recent release “Running” is mesmerizing from the hypnotic chorus to the mix of synthesizers, string samples and a grand piano.

Laced with their autobiographical lyrics of heartache, unrequited love and the trials of adolescence, The Magnette’s playful harmonies and catchy pop melodies are much more than their first impression lets off. Influenced by Elvis Costello and The Ramones, founding members Rebecka Digervall and Sanna Kalla battled their childhood years of growing up in a silent, isolated community by an open rebellion of singing honest, heartfelt lyrics – which they’ve soon come to be praised for across Europe and the US.

Artists and The Branding of Cool