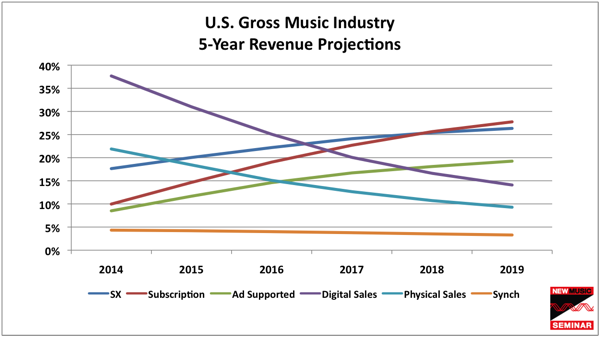 A New-Year industry overview traditionally is a retrospective but the New Music Seminar is all about the future of music and the music business so we look forward. Here we look five years into the future and make projections about music industry revenues.

In 2014, it became clear to the New Music Seminar that there are now six significant revenue streams to the music business. We are talking about the recorded music business here, not music publishing, live music, or music merchandise.

The six revenue streams are, in roughly historical order:

It is becoming clear that neither physical music sales nor digital music sales will go away. They will coexist with various streaming options. Each music consumer will contribute to the industry from many of these six revenue streams. Someone might listen to Pandora, buy a CD, download a single, watch music on YouTube, hear music in films and subscribe to Spotify. It is no longer a zero-sum game. The music industry has become a delicate ecosystem with different music values that support artists and their investors. Each sector has a different ARPU (average revenue per user) and therefore contributes at different levels to the music industry.

We project conservative levels of growth for the newer revenue streams. It is also important to note that physical music sales have costs associated with them such as manufacturing, shipping and publishing mechanicals. Digital sales also have publishing mechanical liabilities that inflate their net value to the music industry. We have removed those costs from the revenues for physical and digital sales in order to make apples-to-apples comparisons of net net impact on the music industry.

In 2014, we saw CD units decline 14.9% while vinyl albums grew 52%. Expect CD sales to continue to decline but the rate of decline will slow. Vinyl album sales will continue to rise but the rate of rise will diminish each year. Revenues to the music business from physical sales will decline from roughly 21.9% in 2014 to 9.3% of music industry net net revenue by 2019.

Contrary to popular belief, music synchronization revenue has not grown. It holds steady at around 4.2% of all net net music industry revenue and will fall to 3.8% by 2019.

Digital music sales recently went into decline and will continue but that rate of decline will begin to slow in a few years. By 2019, digital music revenue will be 14.1% of the net net music revenue pie down from 31% in 2014.

SoundExchange revenue will continue to grow from 17.6% in 2014 and exceed a billion dollars a year to surpass 26% of all net net music industry revenue by the end of 2019. At the recent CES convention, they predicted sim-card connected cars to quadruple during this period – further accelerating the growth of on-line music listening.

Advertising-supported on-demand streaming like YouTube and Spotify Free are growing rapidly in revenue and will grow to 19.2% of all net net revenues by 2019. Mobile advertising revenue is exploding and music-related mobile advertising may prove to be one of the biggest parts of this growth because audio ads do not require visual attention while driving or walking.

Subscription-based on-demand streaming will grow rapidly in 2015 as this sector hits critical mass and general public awareness grows. YouTube and Apple will enter the market this year giving a big boost to music subscribers. This sector creates the highest ARPU for music possible and extracts the most revenue per consumer for artists and their labels of any sector. This sector will grow from 10% in 2014 to contribute at least 27.8% of music industry net net revenue in 2019. Remember, TV took around 40 years to reach 100 million subscribers. SiriusXM took 10 years to reach 27 million subscribers. U.S. music subscriptions will reach saturation of between 100 and 200 million subscriptions, but it may take 20 years or more for this to happen.

Take a guess. The answer is at the end of this article.

One interesting change in the music industry mix over the next five years will be the relative importance of albums. In 2003, 96% of all music revenue was from album sales. All that changed when iTunes brought back the single. By 2007, singles sales eclipsed overall albums sales and they haven’t looked back. Today, individual song revenue comes from YouTube views, Pandora or SiriusXM plays, Spotify listens, music synch song usages as well as single downloads. Only album downloads and CD or Vinyl LP sales can truly be said to be album revenue. In 2014, 45.5% of net net music industry revenue came from albums but by 2019, albums will only contribute 20% to overall music industry net net revenue.

The New Music Seminar 2015 analysis and future of the music business projection is very conservative. It does not project a quantum shift in subscription revenue that would be necessary to see a doubling of the music revenues during these five years. This analysis does, however project overall U.S. net net music industry growth from around $4.3 billion in 2014 to around $5.5 billion in 2019. Considering the decline of greater than 50% from 2000 to 2010, this return to slow and steady growth is extremely positive for the music business. 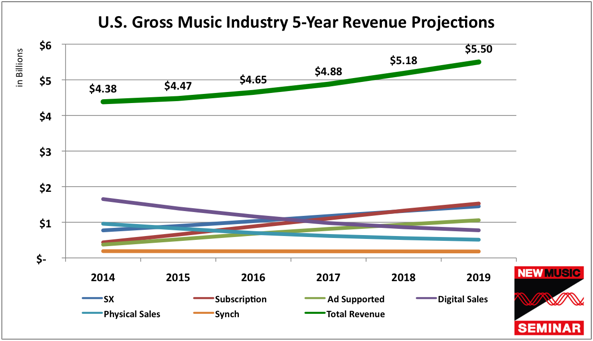 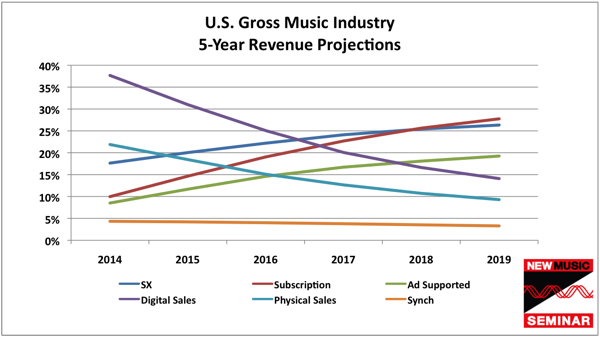 Please feel free to continue the discussion in the comment section below.

If you would like to be on the floor with those leaders discussing similar items like this – along with the future of the music business…
Then mark your calendars for June 21-23 in New York City.

If you would like to save 20% off your registration, simply complete this NMS survey.

Presenting the Second “Group of 8” Speakers

NMS @ SXSW: Everything You Know is Obsolete