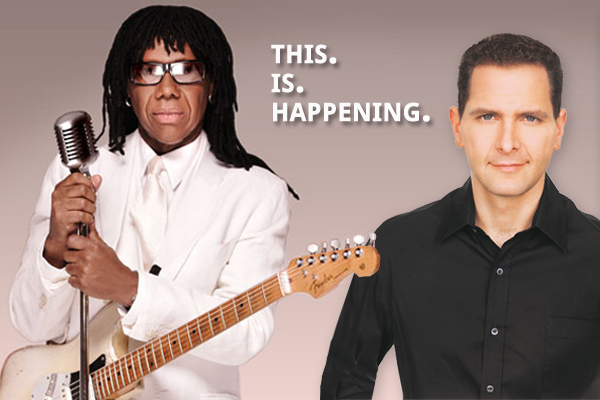 Nile Rodgers and Craig Kallman Together at New Music Seminar 2014

2014 NMS delegates will have the opportunity to witness what happens when one of the greatest producers of all time, along with the CEO of one of the most distinguished record labels in the music business, lead a discussion on the evolution and current role of the music producer.

Producers are a critical link to help artists connect to potential audiences. More relevant than ever, most are now involved with songwriting – even becoming artists themselves, such as Bruno Mars and Pharrell Williams. This movement will discuss the varying roles of successful music producers – from artist psychologist to sound engineer to music consumer analyst.

Nile Rodgers is a songwriter, producer and musician who for decades has contributed his talents to many of the most memorable recordings of all time. After his initial success with band CHIC (“Good Times,” “Le Freak”), Nile and his CHIC partner, Bernard Edwards, wrote and produced the biggest selling records for Sister Sledge (“We Are Family”) and Diana Ross (“Upside Down,” “I’m Coming Out”).  After his success with The CHIC Organization, Nile went on to produce, compose and/or play on some of the music industry’s best selling recordings, including music for David Bowie, Duran Duran, Madonna, INXS, Mick Jagger, Peter Gabriel, Britney Spears, Joss Stone, and Maroon 5. He most recently made headlines as a collaborator on Daft Punk’s 2013 comeback album, Random Access Memories, which took home several GRAMMYs, including “Album of the Year.”

Craig Kallman got his start as a young DJ in New York, where he was invited to play at the city’s hottest venues during the 1980s.  He worked at 95.5 WBRU-FM in Providence, R.I., and after graduating from college, started an independent record label, Big Beat Records, which Atlantic Records acquired in 1991. Craig moved up the ranks at the label as A&R executive and was named chairman and CEO of the company in 2005. Under his leadership, Atlantic’s market share has risen steadily: The company climbed from the No. 6-ranked industry label in 2004 to No. 2 in 2007.  By spring 2008, Atlantic was the No. 1 label, and now hosts an impressive talent roster, including Skrillex, Wiz Khalifa, Bruno Mars, Kid Rock, T.I., Trey Songz, and more.

The New Music Seminar is the world’s most influential Music Business convention, led by the voices that disrupt the conventional, tackle key issues, and provide a stage for trailblazing artists to shine. NMS is the place to network, engage, and discuss the future of the art and business of music.

SoundExchange is the independent nonprofit performance rights organization representing the entire recorded music industry. The organization collects statutory royalties on behalf of recording artists and master rights owners for the use of their content from satellite radio, Internet radio, cable TV music channels and other services that stream sound recordings. The Copyright Royalty Board, created by Congress, has entrusted SoundExchange as the only entity in the United States to collect and distribute these digital performance royalties from more than 2,000 services. SoundExchange has paid out nearly $2 billion in royalties since its inception. For more information, visit www.SoundExchange.com or www.facebook.com/soundexchange.